On June 28th the Olympic torch visited Mansfield, Nottinghamshire and my daughter's class plus a couple of others went to see it. We had rain, hail, thunder & lightning once we were off the train as we were walking through Mansfield. We were absolutely drenched, even though we had waterproofs on. Luckily for us a school there took us in so we could eat our lunch and dry off a little bit. Then we walked to the designated area that we had been allocated and armed with our flags we waited patiently. The only things that were going past us were the police on their motorcycles making sure the crowds were cheering. 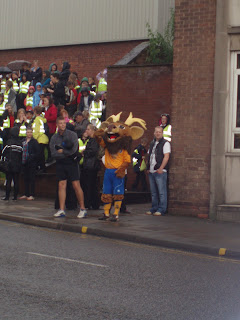 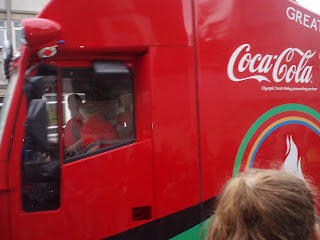 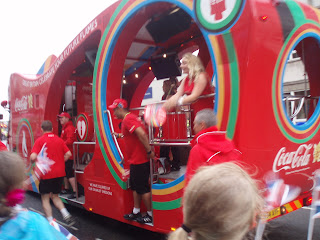 cheerleaders on the coca cola truck 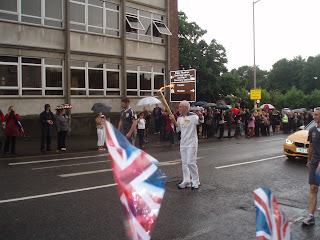 The torch bearer, for him the rain had stopped. 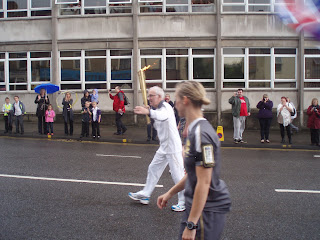 Here he is as close to him as we could get. It was a brilliant 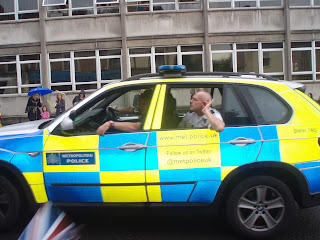 The police didn't like it if they couldn't hear you cheering. We were told before it started that they would stop until they could hear the cheers and she was correct, this was the police car following the torch bearer and it stopped as we weren't cheering!!!

All in all, in spite of the weather we'd had in the morning it was something not to be missed.

Once we were back we got stuck in another thunder storm, torrential rain and we got soaked through once again walking back to school.  Marion was allowed to come home as I was with her and as soon as we were in, we got straight into our pj's and put the heating on.
Posted by Heather at 19:47