Lots of snow in a snow globe. I loved making this card and Marion loved sprinkling all the glitter into it. 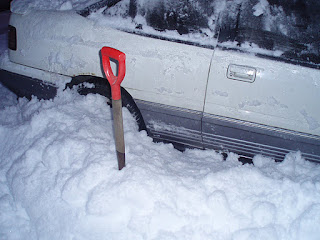 This time last year I spent over 2 hours trying to dig my car out of the snow. It was an impossible challenge and I had to admit defeat, the photo shows how far I'd got after the 2 hours - not very far really. It was the Brownie Christmas Party and although she was upset that she probably wouldn't get to go, she knew it was safer to stay indoors. Luckily the ex-MIL was up that day and she took us and brought us back.

Unless we have 6ft of snow drop on us in the next couple of hours we are safe this year, I do hope that we get snow though, I love snow.

Yesterday the ex-MIL came and this time around it was quite strained and hard work. She made sure to tell us she would be going early because she doesn't like driving in the dark and when Marion suggested we take a drive to Clumber Park, she said it was too far to go and she wasn't staying long enough. So my daughter did her best to stay grumpy and moan at everything. The only thing she enjoyed was giving the ducks a bread roll (only the one as MIL made sure in telling her they were bought for her not the ducks). She asked for a couple of things seeing as she was being asked what she wanted for Christmas and she was told no because Grandma had spent a lot of money (I head Marion mumble 'not on me') and she wasn't buying silly things just for the sake of it. My question is why ask what she wants for Christmas if you have no intention of buying her anything?

Marion is quite right, it's all spent on her cousins. Normally she doesn't care that she doesn't get anything from them, but perhaps because she was asked so many times what she wanted and was then told no - what was the point of it all and that's why she was grumpy. I don't blame her.
Posted by Heather at 11:23